Most of us when we hear the word corruption think of 'backhanders', something given or promised in order to improperly influence a person's conduct or decision, usually a gift or money. However we would be wrong if we thought that is all it's about. Corruption is a very strange phenomenon in many ways, not in the sense that is exists but more in that when identified, quite often rather than being exposed others are sucked in by definition of the fact they do not expose or disclose, that by omission and virtue of their knowledge they too are corrupted;  Many would say to be corrupt you do not have to receive a personal 'gain'. Some would say systems and processes are corrupt not people, that people are merely human and therefore frail and vulnerable to an existing circumstance, ie there is no such thing as the 'Rotten Apple' syndrome, but if so what of morality and personal responsibilities, free will and choice?

One of the problems with the rotten apple theory is for that theory to be true there must only be single parties independent of each other who are all about themselves, so greed and personal gain. However for an individual person to be considered corrupt there clearly has to be a manipulation or divergence of what is proper or correct, in other words exploitation to gain. That said we are then confronted with those within processes, systems or organisations who are deemed corrupt, are they rotten apples or is it worse the tree is infected, or even worse than that is the whole orchard diseased, and if so does that mean the surrounding soil is contaminated, and if so what of the farmer tending the soil, are they then corrupt? It does seem that there appears to be some dissent regarding levels of corruption, the implication being there are different types and that some are acceptable?

Detectives who fabricate evidence and logs to give the impression to a jury and the courts that fingerprints and items which came into their possession 4 months after a crime was committed were found at the scene of the crime 4 months earlier? Involves more than one party, collusion possibly systemic at the time as the police called it 'dressing the cake', so is that corruption? My personal view is yes, and a divisional commander of the metropolitan police agreed and apologised in person to the criminal in the presence of the solicitor, however only after 6 years of 'chasing' by letter, after CIB1 and CIB2 had been disbanded, and after the offending police officers had retired and after the criminal agreed in writing they would not seek an appeal. Some may even say in addition to the act the conditions in which the apology was offered and came about were also corrupt? In such circumstances the detectives can retire and go on to lead a productive life, earning a living with his CV intact and portray a facade of decency to any and all who enquire, despite the fact they are as much criminal as the people they have imprisoned throughout their careers. "Shocked by the extent of corruption within its ranks, Scotland Yard set up a new anti-corruption unit in the early 1990s. Its members had to operate in conditions of unprecedented secrecy and they became known as the 'Ghost Squad'. Bent Detectives really did believe they were untouchable: they stole cash and property, fitted-up innocent people and sold secret information to cripple court cases. Many of them are now in jail or awaiting trial but the battle against corruption is not over.  Only now can the story of the 'Ghost Squad' be revealed. Award-winning BBC home affairs correspondent Graeme McLagan had followed the investigation since the beginning. He has interviewed undercover officers and many of the corrupt officers they have exposed".
What about the prison officer who accepts cash/goods/benefits to smuggle items into prisons or make life easier for a prisoner inside their prison? What about the same prison officer committing the same acts but out of fear of threat to himself or his family but chooses not to report events?  What about their peers who are aware but say or do nothing?  The Prison Officer who leaves the service and in preparation for when he does takes copies of the OASys software, internal prison service training and guidance manuals, confidential material relating to prisoners. People within administration or management positions who manipulate and adjust schedules or worse 'lose' paperwork in order to delay proceedings to benefit their friends? The person in power over a vulnerable person in their care who knowingly writes a false report for example a social worker or probation officer with a theory 'adjust' the history of their client to fit their errant theories and when discovered are simply removed from the case, is this corruption?  The manager of those persons who simply sign off a report giving the impression they have read and agree with the report but the reality is they read nothing they are simply protecting one of their own.

The taxi driver who agrees to take you somewhere for cash in his pocket as oppose to on the meter, or the Maitre D' who accepts money to seat you at a good table or 'bump' another when the restaurant is full, both deprive their employer of income? What about the people who make these requests of those in a position to assist who then succumb; Is this corruption? The professor who uses research from their students or interns to further themselves, their research or publish, all without any accreditation or recognition to the contributors. Many would say this is life, it is part and parcel of the world we live in, where is the line? Who draws the line and just because you drew it does that give you the right to cross it or redefine it at will, and if you do and are discovered, what then?

If as many believe corruption just 'is' and some say it appears NOMS do because they refuse FOI's on the subject and don't seem to want to invest in real systems which will catch corrupt or violent staff, what is the answer?  They don't want to bring in enhanced recruitment processes which include tools such as Psychometric testing, when one would say you can never have too much information, in particular about someone who was volunteering to hold power and control over vulnerable people.

There are psychological factors at play in all areas or incarceration, and whether research showed a drop or not in corruption or violence, the fact that a person was wearing a camera system being monitored externally and was synchronised with a GPS system with 'live' systems at all times whilst they were inside their respective institution; in my humble view would certainly have very obvious effects on their demeanour and outcomes regarding spurious allegations, complaints etc.  So the question remains why NOMS are not entertaining the idea as a realistic proposal and possible solution, and is the fact that they are not doing so, in itself corrupt?  A ten year telephone contract negotiated in the midst of a recession was not corrupt, staff stealing food is not corrupt, staff receiving benefits such as sailing trips or beneficial loan rates is not corrupt, free hanging baskets of plants from prison gardens is not corrupt, the list goes on and on to the extent you have to wonder about motivation.  You cannot be involved with this sector and not know or have heard about what happens.  So how can so many, so called respectable people and organisations, carry on day in day out making the same noises, taking home their salaries, quaffing copious amounts of wine and food, pontificating over dinner lunch or at an event, when the truth is they all appear to be a sham.  By definition then where does the corruption begin? Where does it lead? Is it in fact corrupt as it appears to be the 'norm' and no one seems to want to stand up and take it on? 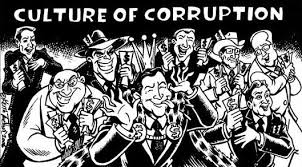